Message in a red bottle – sending out an SOS 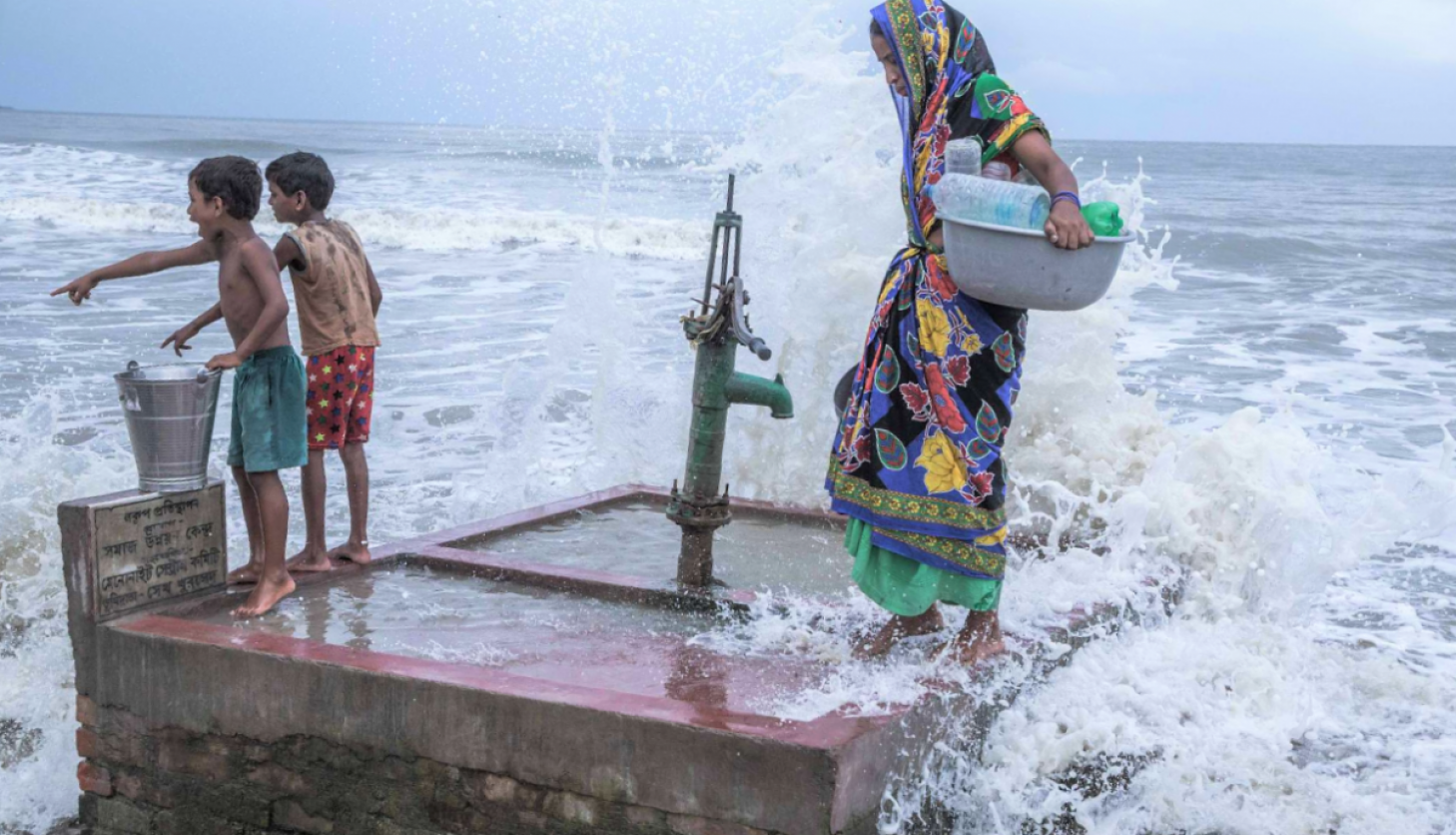 Report of a WASH Debate on climate adaptation.

Since 2014, IRC has been organising WASH debates in The Hague. The focus has been on the Dutch development sector’s response to wicked sector problems against the backdrop of the government’s commitment to provide 30 million people with sustainable access to safe water and 50 million people with sustainable access to improved sanitation by 2030. The Dutch government listed environmental degradation and climate change as one of the four critical challenges facing the implementation of their 2016-2030 WASH strategy. Climate adaptation and the protection and restoration of resilience of water-related ecosystems are considered crucial, the strategy says.

As a result of the COVID-19 pandemic, the first IRC WASH Debate in 2020 on “Climate adaptation in the WASH sector: distraction or necessity?”, transitioned for the first time into a virtual version, open to a broader, more international audience.

The WASH Debate was shaped to answer three questions:

Debate facilitator IRC’s Arjen Naafs gave examples of the dilemmas the WASH sector is facing: in Burkina Faso insecurity is seen as a bigger threat than climate change; in South America a utility manager is already struggling with 40% non-revenue water, and in Africa a water system designer wonders how much more buffer is needed to cope with climate change. We mustn’t let climate change undo the progress we have already made. The more resilient WASH systems are, the better they can cope with change. 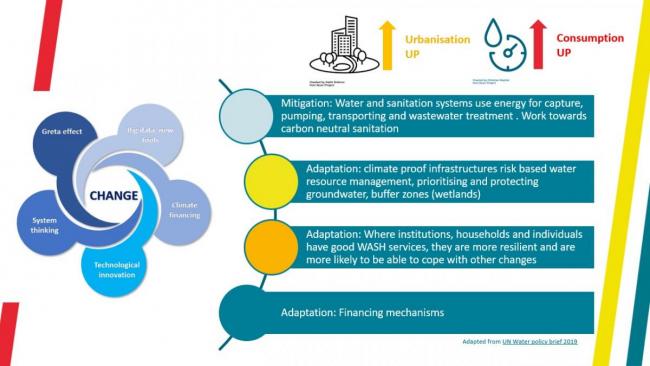 The WASH Debate took place on 17 June, attracting 120 participants from some 20 countries of whom 2/3 came from international NGOs. There were NGO speakers active at international, national and local levels and a discussant representing government in the person of the Climate Envoy for the Netherlands. Throughout the debate, participants had the opportunity to participate in online polls and a quiz hosted on Mentimeter. 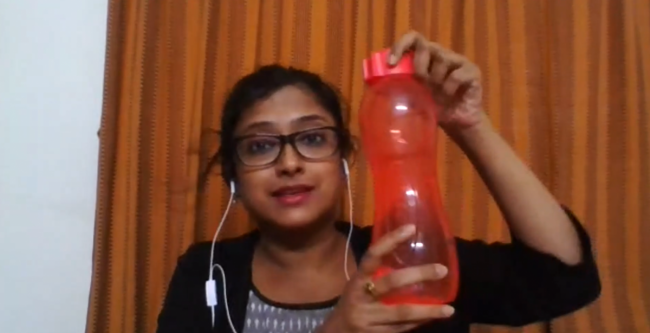 Mayuri Bhattacharjee is a passionate Menstrual Health & Gender Equity professional. She is the winner of the 2019 Ton Schouten Award for WASH Storytelling and a 2018 Climate Reality Leader.

For Mayuri, her red water bottle is a constant reminder that climate adaptation is a necessity. In May 2020, during the COVID-19 pandemic, super cyclone Amphan hit her city Kolkata in India, and the climate crisis entered her flooded house. For 56 hours, water, electricity and mobile telecommunication services were cut off. She and her family were forced to ration water. For Kolkata and other coastal areas, climate change means rising ocean temperatures and more destructive cyclones and hurricanes. Climate adaptation in the WASH sector is a necessity.

During the 56 hours when her water was cut off, Mayuri came to realise that she – a WASH professional, her city and the WASH sector were not prepared. Her red bottle is “sending out an SOS” reminder that climate preparedness is needed at city and personal level.

She asked the audience to think about the type of leadership the WASH sector should take to tackle the climate crisis. This is a topic close to her heart for which she feels a personal responsibility to help resolve it.

Commenting on Mayuri’s presentation, Climate Envoy for the Netherlands Marcel Beukeboom remarked that climate change appears to be an equaliser because it affects everyone, however, Marcel stressed that it disproportionately hits the poor and women the most.

Watch the video of Mayuri's presentation below (also included in the complete recording of the WASH Debate at the end of this report).

Ethiopia is prone to extreme climate variability, especially major floods and droughts. IRC Ethiopia Country Director Lemessa Mekonta asked the question: is that a result of climate change, poor water management or the existing harsh climate? In practice it is a mix of all. Short to long-term predictions show that higher temperatures could eventually reduce water availability by 50%.  But there are already pre-existing problems.

The WASH strategy for climate change adaptation is water-focused, covering three aspects: groundwater quality and quantity; energy efficiency and renewable energy; and multi-village water systems. But this is not enough. Sustainable water systems need to be properly designed and managed, otherwise climate change will only aggravate existing deficiencies. So not only adaptation is needed: the sector also needs to do its normal work in a good manner. Lemessa also warned that climate adaptation could become a distraction. It could be used as an excuse for every failure in WASH services or as the sole solution for all problems.

Climate Envoy Marcel Beukeboom added that early action to make systems climate resilient is the most effective approach and seven times cheaper than waiting a couple of decades. Designing systems with resilience in mind is often forgotten – adaptation only comes after disaster has struck.

Watch the video of Lemessa's presentation below (also included in the complete recording of the WASH Debate at the end of this report).

The WASH sector remains chronically underfunded, SNV CEO Meike van Ginneken told us, and many hope that climate finance can help fill the gap. So far advanced economies have only pledged US$ 10 billion (for all sectors) to the Green Climate Fund (GCF), which was established in 2010.  This is far short of the GCF’s goal to mobilise US$ 100 billion per year by 2020 and even that amount pales in comparison to the estimated US$ 400 billion in fossil fuel subsidies in 2018.  Most available climate finance is not available as grants but as reimbursable financing ranging from concessional soft credits to commercial loans.

Climate Envoy Marcel Beukeboom agreed that the US$ 100 billion was insufficient. It was disappointing so see that only 4% of the G20’s COVID-19 fiscal rescue measures is “green” (Hepurn et al., 2020, p. 6). Marcel believes that the most important section of the 2015 IPCC Paris Agreement is 2.1.c, which stresses the need to mainstream climate change in all financial flows, bringing them in line with both climate mitigation and adaptation.

In Europe, funding for WASH investments and costs remains highly dependent on public finance – in the Netherlands, for example it accounts for 60%, the remainder coming from households. In less wealthy countries, Meike says, it is hard to recover costs from users, making it difficult to create sufficient cashflow to attract investors. On the positive side, she believes it is still worthwhile to seek climate finance as it can free up scarce public funds needed to provide climate resilient WASH services to those most in need.

Meike has the following tips for those who are bold enough to engage with climate investors – for full details read her blog “Climate change, WASH and financing”.

Reflecting on the presentations, Marcel Beukeboom stated that the term “debate” was a misnomer as all three presenters clearly conveyed that climate adaptation is a necessity and not a distraction. They took it a step further by focusing on the “how” of climate adaption. Being smarter as Meike pointed out. The danger of a WASH sector approach, however, is that it can lead to a silo mentality. Climate adaptation should always be linked to real-life examples of the impact of climate change in countries, regions and communities, as illustrated by Mayuri and Lemessa in their presentations.

Now is the time to analyse what’s wrong with our old systems, so we can make the right choices moving forward, Marcel concluded. We must deal with the threats of short-term rescue package bailouts, the old economy and silo mentality, while addressing the sources of systemic inequality  – and keep on telling these stories.

Why is comparatively so little being spent on hygiene in the fight against COVID-19 or on combating climate change?, IRC Bangladesh Associate Digbyjoy Dey asked. Is it because we are not speaking the right “language” when communicating with policy makers, financiers and the public?

According to Water for People Malawi Country Director Kate Harawa, investors want immediate, tangible results. It would help for instance if we could demonstrate that their investments led to a reduction in water treatment costs or soil erosion.

The presenters closed the WASH debate with their takeaway message. Mayuri stressed the importance of telling stories and educating WASH professionals about the climate crisis. For Lemessa it was about viewing WASH from a resilience/emergency perspective. Meike told we need to increase finance for WASH and there should be no excuse for government not to invest; unbundling is not in conflict with systems thinking: we need to think in terms of systems but translate this into projects; and finally, all solutions are local, get out of our silos and become friends with people who know about finance.

And for those unfamiliar with the English rock band The Police, the title of this blog refers to their 1979 hit "Message in a bottle".

Next WASH Debate and acknowledgements

Thanks to Stef Smits and Arjen Naafs for reviewing this blog, and Tettje van Daalen for copyediting

Watch the video recording of the full WASH Debate below.

Tips for the WASH sector on how to capitalise funding opportunities offered by climate finance.
Blog by SNV CEO Meike van Ginneken, June 2020

Poor sanitation is the shittiest consequence of climate change