A market-based approach to curb the COVID-19 pandemic 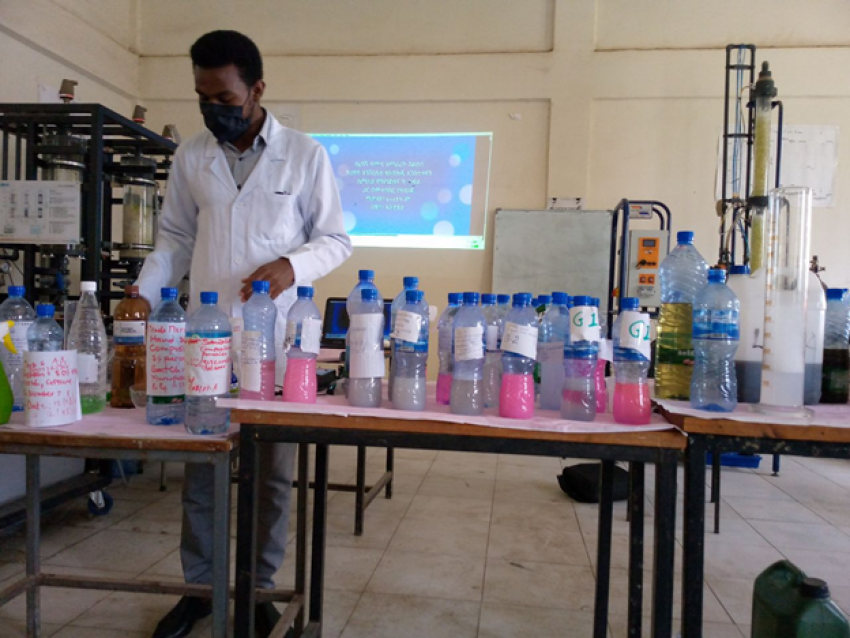 Despite disrupting almost everything negatively, the impact of COVID-19 in terms of putting WASH interventions in the spotlight was a blessing in disguise. Following the pandemic, the need for better hygiene and sanitation facilities and services became obvious and a priority for both government and other stakeholders. However, the lack of an established WASH market, compounded with poor hygiene and sanitation facilities in both institutional and community settings, made the prevention of COVID-19 a daunting task in less developed countries like Ethiopia.

In contexts like Negelle Arsi and Shashmane districts, there were few, if any, suppliers of hygiene and sanitation items, including handwashing stations, hand sanitisers, and face masks, at an affordable price, prior to and during the onset of the pandemic. The WASH First COVID-19 Response Project implemented in these two districts, is a one-year intervention against COVID-19 to mitigate its catastrophic impact and create a fast and smooth recovery through the provision of personal protective equipment (i.e., handwashing stations, hand sanitisers and face masks), and awareness creation in Shashamene and Negelle Arsi. It is primarily implemented by Amref Health Africa, with IRC documenting key learnings and producing knowledge products.

To fix failures in the local market’s ability to provide essential products and services, the WASH First COVID-19 Response Project has been temporarily filling the gap through emergency responses. For instance, the project procured and distributed 60 pedal-operated and contact-free handwashing facilities and water containers with liquid handwashing soap for health centres, health posts, and schools in both districts. Though most of these items were made in Ethiopia, it was not easy to efficiently procure them as they were not available in the project intervention areas.

The project also provided a package of personal protective equipment for more than 4000 households in the intervention districts focusing on the most vulnerable community members. The elderly, people with disabilities, female-headed households, and people with other comorbid illnesses including HIV, mental illness, diabetes, and high blood pressure were given priority and provided with a jerrycan, bucket, sanitisers, soap (for both laundry and body), and washable face masks.

To reverse the unintended effects of emergency responses, the WASH First Covid-19 Response Project was designed in a holistic manner aiming to develop a WASH market that can serve the community in effective and sustainable ways.

Through collaboration with the local Small and Micro Enterprise (SME) offices in both districts, the project identified youths who were eagerly seeking an opportunity to embark on feasible business ideas. A total of thirty-five (35) youths were identified based on their education level from the long lists of unemployed youths at SME offices. A total of six experts were also involved in the training from three sector offices (i.e., Small and Micro Enterprises Office, Women and Children Affairs, and Woreda Health Office). Out of the 35 youths, eleven (11) were females.

The fact that the level of education was used as the only criterion was given as the reason for low involvement of women in the training.  “First, we screened degree holders, then those with diplomas, and then those with certificates,” Tsehay from the SME office indicated. When further asked if she found the training as sophisticated as she thought, Tsehay admitted the training was in fact delivered in a down-to-earth manner which could easily be comprehended by someone with a high school education.

The training was provided in partnership with Hawassa University Institute of Technology and focused on how to manufacture liquid soap and hand sanitisers. The trainees were totally impressed by the training approach and with their overall learning outcome at the end of the six-day training.

A well-balanced blend of theory-and-practice-based training: The training was provided in the laboratory setting of Hawassa University Technology Institute. Despite lacking any sound background in the field of chemistry, all the trainees were fully confident to produce liquid soap at the end of the training.

Bedhaso Tashite, 21, expressed, “I am not that much into chemistry. But after the training, I often caught myself, even in the middle of the night, wondering what I have learned and seen during the training. The six stages of mixing the chemicals and producing a liquid soap is a mystery that has captivated me.”

Another trainee, Desta Kedir, corroborated Bedhaso’s assertion stating, “The trainers were very practical and quite experienced. They started with simple questions. From there they took us through the nature and process of mixing the chemicals to produce soap. I hope I will make the most out of it by establishing a successful soap business.”

A friendly and egalitarian training environment: The trainees confessed that they were initially intimidated by the idea of manufacturing liquid soap and hand sanitisers. However, they were all impressed by the friendly and down-to-earth approach of the trainers at the university.

The phone interview with Muluken Zenebe from Hawassa University Institute of Technology demonstrated the fact that they provided the training with passion and commitment to help local innovation in mitigating local challenges. “Due to COVID-19, we have seen a rise in the demand for soap. There were also concerns about the quality and misunderstanding related to local manufacturing. We wanted to intervene and contribute as Institute of Technology,” Muluken stated.

Hawi, a female trainee, confessed that “I thought producing soap is not meant for an ordinary citizen like me, and when I travelled to Hawassa for the training I was not that confident that I would learn something of value that would change my life. But after six days of training, and also visiting a female business owner selling liquid soap in Hawassa town, my perspective has totally changed. I have realised the knowledge and skill we have gained is indeed practical and has the power to change our life.”

Involving experts from key sector offices in the training: Tsehay, who attended the training as one of the experts from the sector offices, expressed that attending the training has inspired her and has given her the most practical skill in her life. She expressed that, “…had our education system been built on such a practical and demonstration-based teaching curriculum, our country would have been totally different. I have never seen such practice-oriented training. I learned a lot in a very short time.” She also expressed her commitment in helping the youths to convert the training into a profitable business model through the provision of working spaces and follow-up.

Samuel Girma, a project manager from Amref’s Shashemene field office said, “The reason for involving the experts were, first, to increase their commitment as attending the training will demonstrate to them the practicality and viability of the business model. Second, we also believe that it helps to build strong collaboration among all sectors involved which guarantee government ownership of the initiative. We believe they will be very swift and proactive after the training in facilitating the logistics and providing working spaces for the youths following the training.”

The irreplaceable value of field observation: At the end of the six-day training, the facilitator arranged a field visit to an established and successful female entrepreneur who is already engaged in a business selling liquid soap, detergents, and sanitisers in Hawassa town. The interview with the trainees clearly demonstrated the unique value of a field visit.  “It is one thing to gain knowledge and skills to produce soap and sanitisers, but it is quite a different thing to turn that knowledge into a profitable business in an actual scenario,” stated Muluken Zenebe, a trainer and instructor from Hawassa University Institute of Technology. 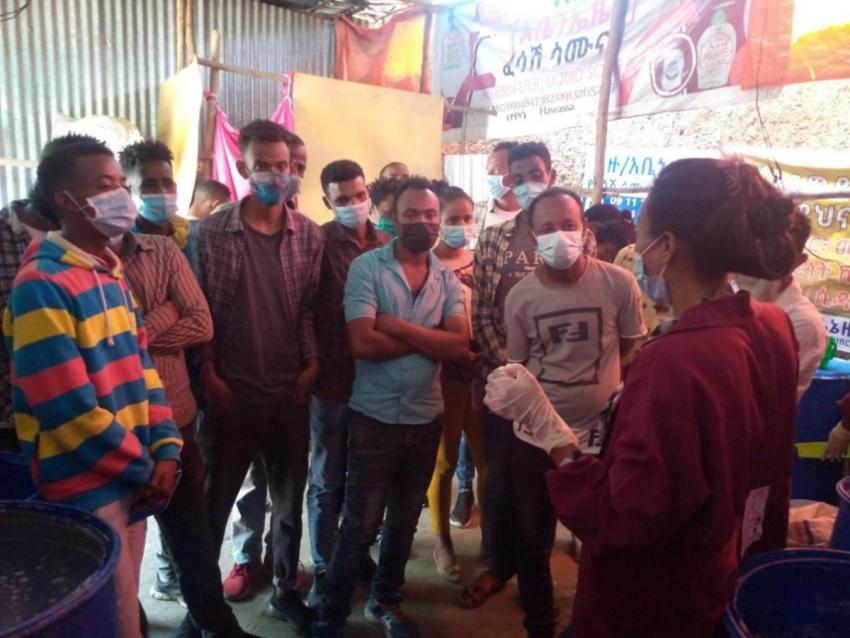 Desta Kedir, one of the trainees who was recently deported from Yemen after his illegal immigration, expressed that a visit to a female entrepreneur in Hawassa town helped him and his team in many different ways. “For one,” he said, “ [the female entrepreneur] learned the skill the hard way travelling to Addis Ababa and paying for the training out of pocket. Second, when she started the business, she was even discouraged and rejected by members of her own family who thought the chemicals were hazardous and the business unworthy of her time and effort. Third, customers were very doubtful of the quality of her soap and she was giving it away free to let them test the quality. After all these obstacles, she has seven employees, and she is distributing her liquid soap from Hawassa to Moyale.

Overall, the trainees demonstrated great enthusiasm of the feasibility of the business and are actively working with their peers to purchase the essential items for liquid soap manufacturing. They are also closely collaborating with local SME offices to get an appropriate working space with high traffic.

There are in fact key areas of consideration for the project to prove that a market-based approach is actually a successful strategy, even beyond the life of the project:

The need for entrepreneurship and business skill training: despite the trainees' enthusiasm, the majority of them lack sound knowledge or skills on demand creation, consumer segmentation, pricing, and revenue management, or even skills for overall business management. If not provided with these trainings, the likelihood that the trainees will establish and run a successful business is not guaranteed.

The need for allowing flexibility in forming business: The SME offices are often concerned about the number of unemployed youths for whom they create a job opportunity. As such, they often organise youths in a businees group ranging from 10-20 individuals before the business is operating. As evidenced in other projects, and from the overall country’s experience on sanitation marketing since 2013, youth associations with large groups were often unsuccessful and abandoned their businesses as they were unable to pay back their loans provided to them as seed money.

It is highly recommended for Amref and SME offices to give the trained youths the privilege of starting the business as they saw fit in terms of initial employees. Desta, a very enthusiastic trainee, mentioned that he already started purchasing some of the items to jumpstart the business. He mentioned that some of his peers were hesitant of the idea and lagging behind in taking action. “I don’t want to be discouraged by their doubt on the feasibility of the business model. If I get one or two members who are committed, I want to start with them instead of wasting my time on convincing others,” he said.

The need for support of initial capital to procure essential equipment: According to the trainees, there is essential equipment that must be procured to start soap manufacturing. These items and ingredients are expensive and beyond the reach of these youths as they require 30,000- 40,000 ETB. As such, the project should consider a way to facilitate the purchase of these items either through direct support or linkage with Micro Finance Institutes (MFIs).

The need to focus on gender equity and social inclusion (GESI): The trained youths were mainly dominated by males as the screening committee primarily used education as a sole criterion. Considering socio-cultural factors that often undermine or deny women and people with a disability the privilege to attend and pursue their education equal to other members of the society is always important in giving these groups equal opportunities.

While the emergency response has its own place in terms of addressing a community’s immediate needs, developing a WASH market will have a lasting impact despite taking time, energy, and needing a more long-term strategy. The key takeaway for both government and development partners is to consider a market approach in their project design and active private sector engagement to enhance access to desired products and services, thereby enhancing communities’ livelihoods in a sustainable way.